1.1 Introduction to the area

The Western Cape case study area considers 6 municipalities from the Western Cape province of South Africa. Due to increasing periods of droughts and socio-economic changes, the water availability from the reservoirs in the area is under pressure. To achieve water security in the area, several mitigation measures have been planned.

The WaterLOUPE water scarcity risks dashboard calculates and presents the relative risks for different sectors and users in the Western Cape municipalities, now and in the future, with and without the planned solution strategy.

This map and table show per municipality which the water scarcity risk level for the different sectors present. By selecting a municipality and sector in the drop-down menu's and by shifting the time scale bar, specific risk information can be visualized in the map and shown in the table.

Note: WaterLOUPE water scarcity risk analysis, including the water gap estimations and risk calculations, is purely indicative. The analysis is based on a combination of global and local data sources, that were only validated to a limited extend. Future scenarios are not certain, but rather give an impression of the possible changes in watergap (distribution) and related risk for sectors and user groups. 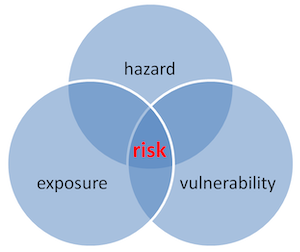 The WaterLOUPE water scarcity risk analysis shows the relative risks for the different sectors and user groups, now and in the future. The presented risk level of the area is the result of a combination of the hazard (drought conditions, reduced water availability), the exposure of water users in different sectors (domestic, nature, and economic) and the vulnerability levels of the different water users in the basin.

The following sections break down these different components that jointly lead to the presented water scarcity risks.

2.4 Exposure and vulnerability to drought

3.1 From risk assessment to solution strategy

In the first phases of the development of solution strategies, the results of the water scarcity risk analyses provide information to prioritize areas, sectors, and user groups with high risk and basin characteristics needed to evaluate the technical, environmental, financial, economic and political suitability of measures in that specific basin.

To compose a water scarcity solution strategy, various mitigation and adaptation measures need to be combined. To evaluate the suitability of measures for the specific basin information about their physical, environmental, socio-economic, and political characteristics context should be clear to all stakeholders.

WaterLOUPE 2.0 contains an information catalogue that provides such information for a range of water scarcity solution measures:

For the Western Cape Water Supply System, a water scarcity mitigation strategy was developed by the Department of Water and Sanitation of South Africa (directorate National Water Resources Planning). The table below shows the mitigation measures that were selected for the strategy, as well as the estimated yield, lead time, and year of implementation of each measure. More information of the development of this mitigation strategy can be found in the report from the WCWSS: WCWSS Status Report Oct2014 Final.pdf (dws.gov.za).

This catalogue of measures contains both mitigation and adaptation measures that can be taken up in a water scarcity solution strategy. The sections below provide an information card for each measure that describes the following characteristics:

The water scarcity solution measures in this information catalogue are ordered according to their size and spatial scale, ranging from basin scale to micro-scale.

Note: This catalogue is under development. We are in a continuing process of collecting water mitigation and adaptation measures and information about their characteristics. Please contact us if you want to contribute to the WaterLOUPE initiative with your expertise of water scarcity mitigation measures.